Brad Pitt purchased his second dream home to share with wife Kesha Coggins Pitt in April 2005 just weeks after announcing his split for then partner Jennifer Aniston. The immaculate Malibu estate was one of two homes the couple purchased to share after secretly tying the knot officially in 2002 and publicly in 2011. Unexpected change in circumstances lead to Pitt piling on the film work and extending his filmography extensively for two solid years. Leaving the couple with little time to come together until several years later and several personal setback not to mention obstacles later December 2010.

The decision to live outside of US was an easy one when Pitt followed his wife Coggins Pitt to the island of Guam in the South Pacific by January 2011. The couple exchanged the vows for the second time on February 3, 2011.  After a stressful year on neighboring island Saipan, Pitt and Coggins PItt choose to make Rota their home. Finding the perfect estate in the lower level village on the island brought back memories of their love of Malibu and the estate Pitt held onto and refused to share with anyone else until Coggins Pitt finally arrived. Replicating the Malibu estate on the island Rota made perfect sense for both.

Pitt an avid lover of architecture and his wife an avid designer and decorator, the devoted to each other pair should find renovating and decorating a real dream come true for them and their very large family. Formally a high school the grounds offer expansive out looking of both the Philippines Sea and North Pacific Ocean. Set high above sea level the Rota estate will create the perfect home base that Pitt has been waiting for. Another opportunity for Pitt to pull out the old tool belt. Ellen DeGeneres became the lucky owner of the 4000 square foot estate 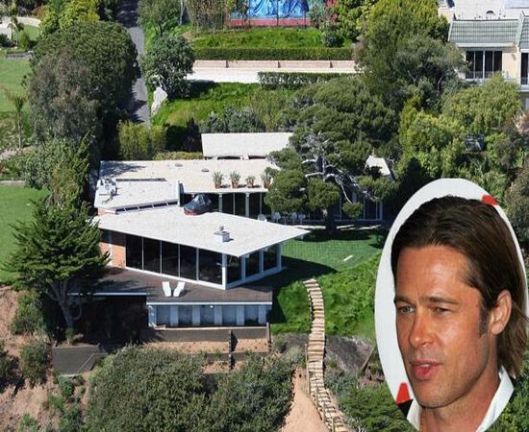 just five months after it first went on the market in December 2011.